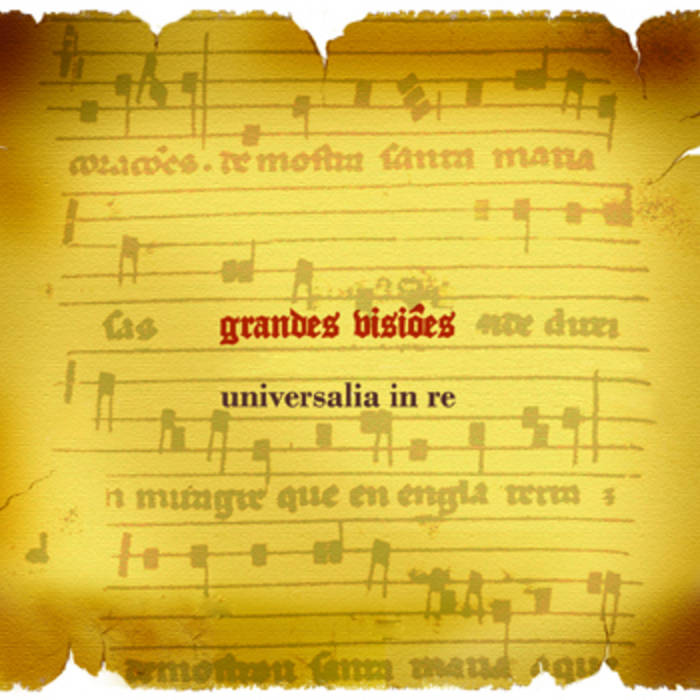 Medieval music ensemble "Universalia in Re" was founded in 2001 with a view to revive a medieval attitude to music as an internal experience capable to change a man. This aim determinates unusual instrumental stuff of the ensemble as well as its repertoire (mostly European music of XIII-XIV centuries).
Together with careful study of musical treatises and analysis of medieval European manuscripts, which keep traces of a unique minstrel culture, the ensemble pays a significant attention to living verbal professional musical traditions of Central Asia and Middle East
The ensemble members participated in workshops of leading medieval music teachers and musicians. The ensemble made concerts in Russia,Ukraine, Switzerland, Estonia, Poland and took part in international early music festivals in Lviv (Lviv Early Music Festival, Ukraine, 2002), Tartu (VI Tartu Early Music Festival, Tartu, Estonia, 2003) and Nizhniy Novgorod (Russia, International Machaut Festival, 2004, EARLYMUSIC, 2005)

The Cantigas de Santa Maria (“Songs to the Virgin Mary”) were composed at the court of Alfonso X the Wise, King of Castile and León who ruled between 1252 and 1284. This is probably the most famous of all medieval songbooks, and a most extensive one. It includes 429 pieces in total, together with two general prologues (one of which is also notated). Three manuscripts of the Cantigas survived, two of which contain both texts and music: the bipartite Codex E (kept in El Escorial) and the Codex To (from Toledo). The latter, most likely the earliest extant copy, also contains a small cycle of five pieces called Cantigas de Jesu-Cristo (“Songs to Jesús Christ”). Three of them are recorded at this disk.

The authors of the cantigas are unknown. It has been argued that the authorship of at least some of them can be attributed to King Alfonso himself, who was a renowned patrón of arts and knowl- edge. Every tenth cantiga in the compilation is a praise hymn to the Virgin Mary, while the rest tell stories of her miracles. Some of these narratives simply paraphrase popular legends, which can be found in many medieval sources, but a number of the stories are quite unique.

The cantigas are written in Galician — the language of song and poetry at the court of Alfonso X. During the reign of this king Castilian became the language of offlcial charters, books and maps everywhere in Castile and León, replacing Latín as a mother tongue of learning. Only in cantigas King Alfonso followed the different tradition.

Musically the cantigas are a remarkable amalgam of diverse cultural and stylistic influences. Musicians from around the world found warm welcome at the court of King Alfonso X. The rhythmical and melodic structures of many cantigas reveal strong Andalusian or Oriental roots. One of the pieces on this disk — CSM 424 — was originally composed in a particular Andalusian rhythmic mode. The same Southern influence can probably be found in CSM 425, also included in the present collection. The stylistics of other cantigas performed by the ensemble echo the songs of Troubadours and Trouveres and conducís of the Notre Dame school.

While the cantigas are very diverse in terms of metrics and rhythm, musically most of them follow the structure of virelais. This musical form, very probably of Arabian origin, is first attested in Western Europe in the works of the Troubadours. By the 14th century it became one of the most popular European musical forms. In the cantigas it appears as AAbbaaAA, where upper-case letters stand for chorus.

All the instruments used for this recording — psaltery, citóle, vielle, rebec, guitarra morisca, double pipe — can be found on the illuminations of the cantigas books. Musicians are depicted there playing or tuning their instruments, most often in ensembles of two, but sometimes as single soloists. In general, it is very rare for the descriptions or images of musical performances in the 13th century to show larger groups of players. It is therefore very likely that it was a customary musical practice of that period to involve only one or two players at a time — the principie which we chose to follow at this record.

We also decided not to shorten the cantigas and perform each of them in full, despite the common practice to approach cantigas’ texts selectively, singing only a few verses of many. There are two reasons for this. First, as many medieval music pieces, each cantiga is a text-music entity, and omitting a part of the text breaks up its original layout, which potentially damages its idea. Then, these whole-length versions offer contemporary listener (as well as performer) the unique experience of a very different from ours concept of time in the Middle Ages.

The title of the disk, Grandes Visióes (‘great visions’), is taken from the CSM 85, where the Virgin Mary shows the visions of heaven and hell to a man, who then changes his ways and becomes a Christian. This is just one of the legends so typical for the cantigas’ narratives.
Other ‘great visions’, most important for all the Christians, are also present in the cantigas: the star leading the Magi to Christ’s manger (CSM 424), the angel’s annunciation of Christ’s Resurrection to the myrrh-bearering women (CSM 425), and the Saviour himself blessing the Apostles while ascending to heaven (CSM 426).